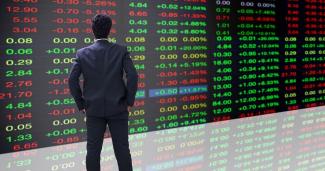 Don't Be Surprised With a 10% Decline

The financial markets have come a long way since March when many "experts" predicted a further major decline in the stock market was inevitable. Those "experts" got it wrong.

When asked by friends and clients (many times) over the past few months "why is the market going up?", I have been telling them (and it has been my belief) that the rally from the March lows has been the discounting of a recovery from COVID and an improved economy and corporate profits in 2021 and 2022. Recent data shows the economy is recovering. The market's rise has also been greatly aided by massive liquidity support from the Federal Reserve and very low interest rates.

Many have stated the stock market is disconnected from the economy. Regarding this supposed "disconnect", in the long run the market is not and never has been disconnected from the economy. It cannot be because the main driver of stock prices is corporate profits which, of course, are driven largely by the economy. Valuations can get out of whack for short periods (like now with some tech stocks), but ultimately the economy is and always has been the primary driver of corporate profits. If you look at some of the recent economic data, it would appear that the "recession" is over. For example, manufacturing PMI has been increasing now for four straight months and August PMI was surprisingly strong. Retail sales are now above where they were a year ago. Unemployment insurance applications have been experiencing a steady decline for several months. This all looks like the end of a recession and the beginnings of a recovery. So it does look like the stock market got it right: that the rally that began on March 23 was correct in forecasting (or discounting) what is now an emerging economic recovery.

What now? There are problems out there. We do not fully know the "shape" of this recovery; it could very well be stunted due to lingering COVID effects. The other problem is valuation. How much of the recovery is now discounted? I think the market (Thursday's decline notwithstanding) has gotten near fair value and is probably at or near fully discounting at least 2021 earnings. I would not be surprised to see a stock market correction led by tech stocks and, of course, we are now entering the "witching" months of September and October, so many traders may be repositioning or de-risking.

Markets go through periodic overvaluation and undervaluation and corrections are inevitable. The keys to weathering these ups and downs are maintaining a disciplined investment plan and not attempting to time the market. While September and October are historically the most volatile months for the stock market, the economic fundamentals are gradually improving. And we've been through this before. The economic outlook is better now that it was in the spring and prospects for a vaccine are improving. There are good reasons to believe the COVID recovery and economic recovery will continue. That is positive for stocks in the long run, but they most like need a "breather" which may be starting now.

We will have a further update following our Q4 investment strategy meeting at the end of September.